MUDs Get AmpedUp!
For: Charging stations for apartments and condos

MUDs Get AmpedUp!
For: Charging stations for apartments and condos

You’ve probably come across this article because you either have a Tesla destination or ClipperCreek EV charger on your property, or you’re interested in obtaining one. If you own one of these chargers, you’ve probably already gotten a taste of how effective it is at drawing Tesla and other EV owners to your location. What you may not know is how much it’s costing you and what you can do about it. It's time to monetize your chargers.

The rate is expected to grow in upcoming years due to expanding electric vehicle adoption as well as the new vehicle lineup Tesla has in store, which includes the much anticipated CyberTruck. Tesla is also investing heavily in its vertical integration strategy with its new Gigafactory plants in Shanghai, China, Berlin, Germany, and Texas, and expanding its facility in Fremont, California. What all this means is that there will be millions, of Tesla vehicles on the road with high-income demographic owners in need of a charge. 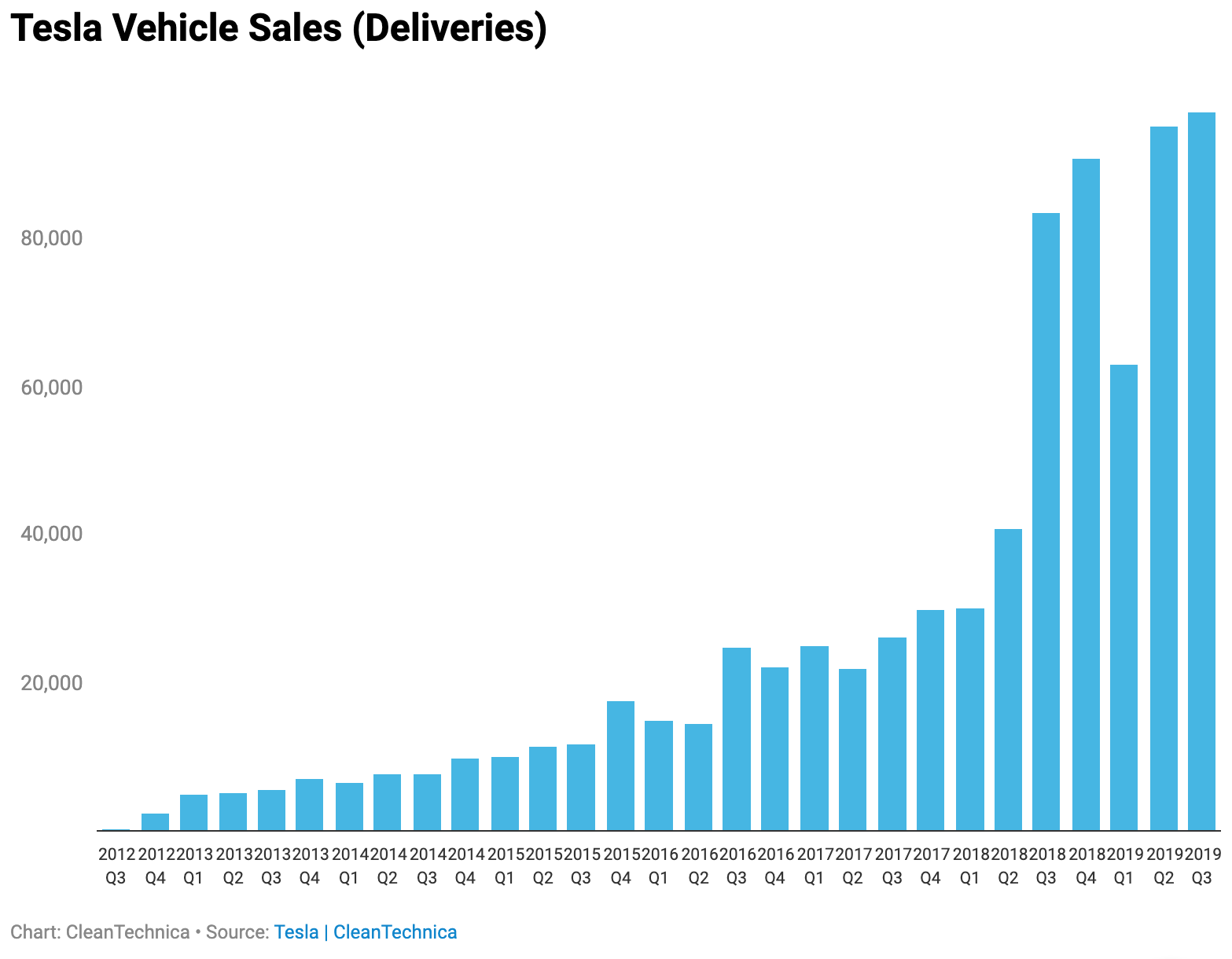 Over 10 thousand hotels, resorts, bed-and-breakfasts, municipalities, restaurants, apartments, workplaces, and small businesses around the globe have recognized this phenomenon and, in an effort to attract customers, have installed what are referred to as Tesla Destination Chargers.
These units are the same as those sold to homeowners, however, they are designated as public charging stations that Tesla lists on its website (workplace chargers are not listed). 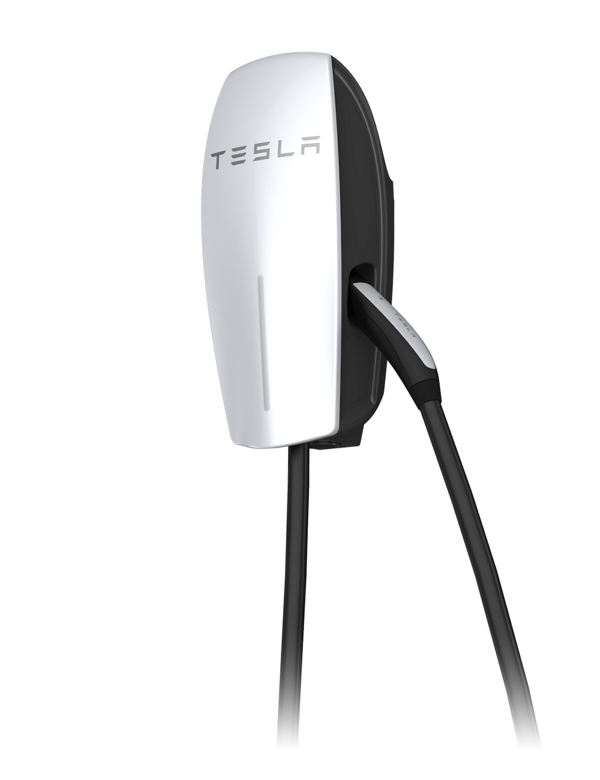 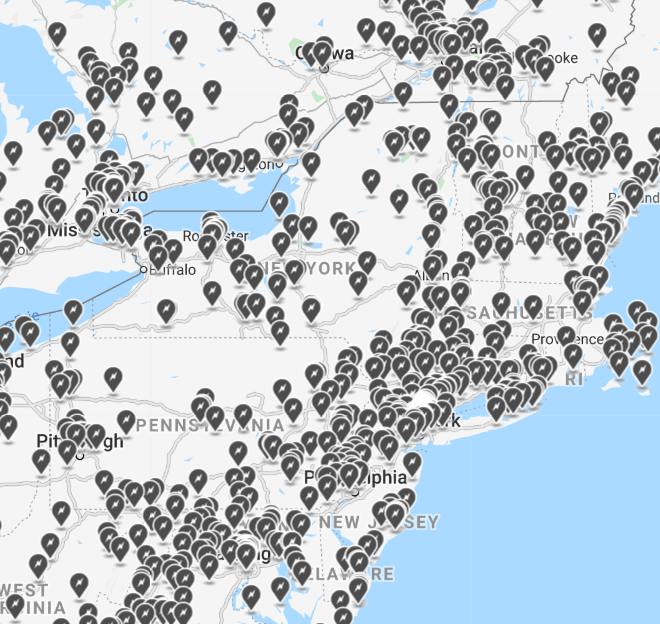 In fact, Tesla in the past, has been known to pay for other non-Tesla branded charging stations such as ClipperCreek chargers so that other non-Tesla EV drivers are incentivized to extend their stay at these locations.

The Upside and Downside of Ownership

At this point it’s clear that installing a Tesla destination or other charger is an easy decision for property owners. With the attraction of Tesla and other EV owners to the property - it seems like a really good deal at face-value. However, it’s not all roses. There are two core considerations property owners must examine: the first, is the cost of electricity used during charging sessions; the second, is the management of the charging stations and EV drivers using them. Let’s cover the cost first.
Cost of Offering Charging Stations
Although considerably less expensive than fueling with gas (electricity is about ¼ the cost for the same driving distance), charging session electricity costs still add up. For example, the national average cost for electricity is $.12/kWh. If a Tesla Model 3, which has a 75 kWh battery, needs an 80% charge, that will equate to a cost of $7.20 ((75 x .80) x .12 = 7.20). If the property has two chargers and they are each used just two times/day at that rate and amount, it will cost the owner $10,512 ($28.80 x 365) per year in electricity costs. That’s for just two chargers! Add more charging stations and costs increase precipitously.
Lack of Charging Station Management
The second consideration is the lack of charging station management. Tesla destination chargers are unmanaged devices. In other words, they cannot be controlled via a cloud service or mobile device. Here are some use cases for reasons why using unmanaged charging stations are problematic.
Inability to Charge a Fee for Use
Some smaller property owners such as bed-and-breakfast establishments and restaurants will manually collect fixed fees for the use of their charging stations. This is inconvenient to the property owner and imprecise for the customer and is not feasible for larger organizations. As the popularity of EVs grow, manual collection becomes unmanageable regardless of the organization size.
Inefficient Parking Management
EV drivers will park their vehicle in limited spots designated for electric vehicle charging only. With an unmanaged charger, there is little incentive for the driver to move their vehicle after the charging session has been completed. This results in frustration for other EV drivers seeking a charge and a lost opportunity for the property owner to attract more patrons, and increase revenue.
Lack of Availability or Pricing Control
Tesla destination chargers are always on, allowing drivers to charge any time of the day even when electricity rates are higher. There is no way to set the units offline or the ability to increase the pricing when rates are at their peak. Sometimes utility rates can double or even triple during high-demand periods.
Limited Power Management
It is common that electrical service panels being used to power charging stations do not support the total power output of all charging stations during full simultaneous use. In addition, it is possible that service panels are shared with other non-charging station equipment (ie: lighting, wall outlets, etc). Although Tesla destination chargers do support power sharing, it’s limited to 4 units which may not be suitable for larger installations and the systems are unaware of power being used by other equipment. In this case, sharing power will reduce the rate of charge resulting in much longer charging session times for all vehicles. In shared equipment scenarios, exceeding the maximum current draw of a service panel will result in the main circuit tripping causing a power outage.

Now, what if the problems mentioned could be solved without any major cost or infrastructure changes? Property owners could turn a cost center into a profit center and service happy EV driver customers. This is where an Electric Vehicle Charger Controller (EVCC) device can help.
‍
With a small investment, an EVCC can be installed by a licensed electrician quickly and with only a few additions to the existing charging station infrastructure. 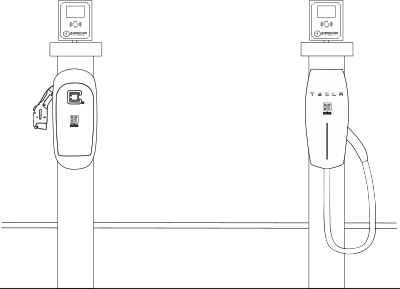 With the EVCC, property owners can easily manage their Tesla destination and ClipperCreek EV chargers. It will enable the following capabilities:
List Tesla destination chargers on Google Maps to attract potential patrons to the charging station location. When an EVCC device is registered, it will automatically list the location on Google Maps. When an EV driver searches for a charging station, the Tesla charger and location will be listed in the search.
Allow EV drivers to unlock the charger with a simple mobile app. Guests can download the AmpedUp! EV Driver mobile app from the Google Play or Apple App store to access the charging station. From there they can scan the QR code clearly visible on top of EVCC device, or swipe an RFID fob which will unlock the charger for use.
Set multiple pricing policies and apply them to different times of the day. Higher rates can be applied during peak rate hours or during higher use times. Typical practice is to charge double the utility cost (ie: $.12/kWh x 2 = $0.24/kWh). Tesla and other EV drivers are accustomed to paying about $0.24-$0.26/kWh or more at Tesla Superchargers. So, using the previous example where an average of two vehicles are charging at 80% on two chargers per day, instead of spending $10,500 per year, $10,500 profit would be realized.
Send friendly text and email reminders to EV drivers to move their vehicle when the session is complete. With the reminder, the driver will be encouraged to move their car so other drivers can make use of the charger and draw more customers to the location.
Charge idle fees if the driver doesn’t move their vehicle in a timely manner once the charging session is complete. This will force the driver to move their vehicle and make space for others.
Allow EV drivers to enter a wait queue and be notified when the next charging session slot is available.
Allow EV drivers to set a reservation and pay for a guaranteed time slot to charge their vehicle. This ensures the charging station will be available when they arrive at the scheduled time.
Load balance power output. If the electric service panel is under powered, the EVCC can limit the charging station power output so that it never exceeds the capacity of the panel. This allows existing electrical infrastructure to be used with more charging stations.
More Benefits
By default Tesla destination chargers are set at 40 amp output, but they are capable of 80 amps. Amperage (amps) directly correlates with the speed of a charging session. The higher the amperage, the faster the vehicle will charge. Faster charging means the charging station can service more electric vehicles, resulting in more patrons and revenue. For example, a typical charging session time for a Tesla is 4-5 hours using a 40 amp charger. Using an 80 amp charger will cut that time nearly in half, doubling the customers that can be serviced, as well as the income received. In addition, Tesla owners are typically willing to pay more for a faster charging session. So, higher rates can be assessed for 80 amp charging. Additional one-time expenditures will be necessary if Tesla destination chargers are set to 80 amps because a circuit breaker and service panel upgrade will be required. However, if using a managed charging station solution, those costs will be offset quickly with more paying customers. Once the initial investment is paid off, the additional revenue is nearly all profit. Again, using the example of two EV drivers serviced per charging station per day (at 40 amps charging speed) at a yearly profit of $10,500, the property owner would instead realize $21,000+ with the 80 amp upgrade.
What’s Next
It’s clear that the demand for Tesla destination and other EV vehicle charging will increase rapidly in the years to come. Property owners will need a solution to offset the cost of electricity and manage charger usage. With some simple low cost additions to the electrical and charging station infrastructure, this solution can easily bridge the existing gap.

The EVCC is now available through our valued partners.
Order an EVCC
The EVCC-DP-101 Basic Edition unit as shown below supports up to two chargers and retails for $549.50.
‍
Fill out the EVCC Request Form and an AmpedUp! Networks representative will refer you to an appropriate EVCC reseller partner and local installer. 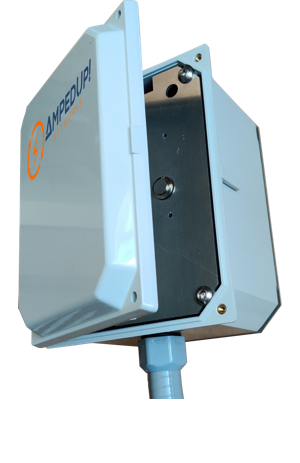 EVCC Request Form
Thank you! Your submission has been received!

You will be contacted by an AmpedUp! Networks account representative to confirm and complete your order soon.
‍
Oops! Something went wrong while submitting the form. Please be sure to use a valid email address and phone number.